From the past: a traffic survey App for S60

Two years ago I had to make many traffic surveys along a big road in Rovigo city during the rush hours: in the early morning and in the late afternoon. I simply had had to count the numbers of cars and long vehicles in the two directions of travel and in preset positions and times (15 minutes per station). To do this I wrote a Python program for my phone: a Nokia N78 (equipped with Symbian 60v3). Here is the full story, code and how it worked.

The work was easy but stressful and repetitive:

I had only a very small problem: how should I have count the vehicles?

My colleagues were used to make a cross on a sheet of paper every times they saw a machine (see the image on the left), but for me was impossible and not handy.

I had to find a solution... First I thought about a manual counter like this, but I needed four of them, it would be difficult to use them simultaneously and I would have to buy them! Then I looked my phone, it was obsolete but it was a small computer and probably I could have found an useful application ready made for me, but nothing to do! 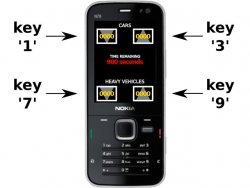 The only solution was to write directly a program for my phone. I known that existed a version of Python for S60 and I installed it in my phone. Only the version 1.4.5 works on it, the most recent doesn't install correctly1.

I found the version here and in these sites I learnt how to write my program:

Python is easy to learn, it has a large community and many books for free, the best introduction to this programming is Think Python book. I only had a problem the indentation! And another stupid one was that I had to use the Nokia SDK to make the process fastest.

I don't remember exactly, but I think that I took 2 or 3 afternoons to learn and write the software. I put both the code and the software in a zip, but I'm sure that at the present nobody are able to try it, how many people have today a S60 phone? Probably just me! So I put a short video of my extinct App.

Source code: Traffic_Surveys.zip (be careful: these files must be put in C:\Python\, if is not possible, you have to change the paths in the source)

Below there is a short video that shows the Python application in action, if you want to try it in your browser, you can click here.