My site renews: a brief description of the migration to Drupal 9

Just four years ago, I migrated my site from Drupal 7 to 8 and now I was forced to update to the new version, which is Drupal 9. Indeed the expiration date, the next November, is nearby, but above all I wanted to change my obsolete theme. Now it has a more modern and optimized look. Below I will describe my brief experience which fortunately was less complicated than expected. 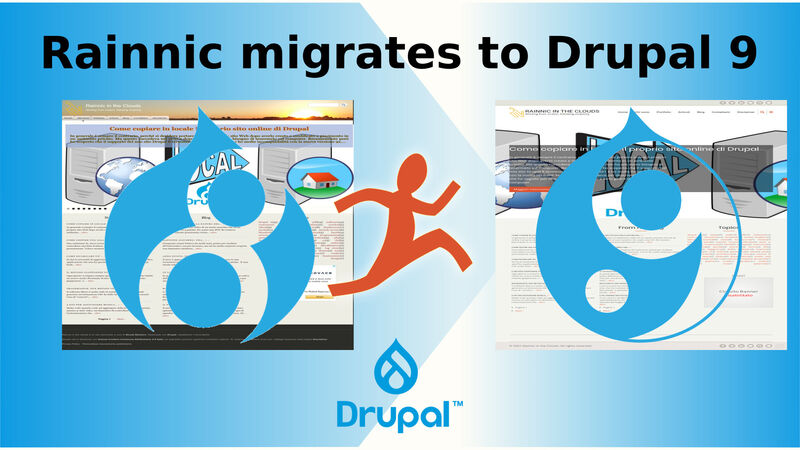 The migration is easy to do because the difference between the 8 and 9 versions is really small, while the update process is the same, indeed you have to:

So I did it immediately when I verified that Altervista was compatible with the minimum requirements (it supports PHP 8 and MySQL 8.0.21). But the incompatibilities due to modules and theme installed in my 8 version were a lot (read my article How to copy a Drupal website from remote to local to see how many they were).

Advice: don't install the Upgrade Status module, in my case I wasted a lot of time because I had to install a new version of Drupal with composer. At the end the report was more robust and complete than the one shown with update.php, but the incompatibilities are the same.

The main problem was the theme, in my case an old version of Bartik with a lot of code customized by me! At that time, I had edited a lot of files, adding JavaScript, CSS and Twig code. Today I don't remember anything about Twig as I have never used it anymore.

Therefore I searched for a new theme available also for  Drupal 9 and I found two awesome ones:

I chose Tara and I bought the PRO version because it has the features I need and it is easy to customize with CSS code. The only trouble was to render the slideshow in the home page multilanguage. In this theme, you have to put the HTML code inside a form, while I was used to creating content in a views (as described here Slideshow of the last articles with Views). Sure I could keep my original views, but in Tara it is easier to edit and to customize.

And so my slide became:

All the modules have a new version that supports Drupal 9.x, the bother is that you have to remove and install it again by hand (I can't use Composer or Drush). In the case of Video Filter and Header and Footer Scripts I have to patch them. I only made a mistake when deleting Footnotes, Mathjax and Video Filter (plugins of CKEditor) I lost also the text format used to add the content to my site. In a few words: my site became empty. I fixed this issue by recreating a new text format with the same name.

In the end, was it necessary to create a local version of my site?

I think that it was a useful choice, for three reasons: